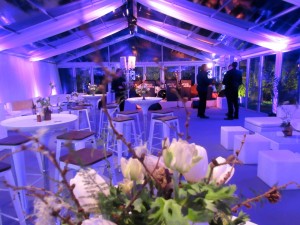 What a fabulous night we had on New Year’s Eve, celebrating the wedding of Marc Smith (Director of Heart Productions) and his beautiful bride Nicola. The wedding lived up to its promise – an incredible celebration and party on the hottest party night of the year. The event was held in the grounds of the parish church in Monken Hadley, an ancient country village north of Barnet on the very edge of London.  You could be forgiven for thinking you were in the heart of the Surrey countryside.

Being a director of an event company, Marc’s seen a few weddings in his time and both he and Nicola threw the wedding rule book out of the window – no formal speeches, no sit down meal but instead replaced them with an endless cocktail bar, champagne and bowl food, all held in a beautifully decorated and vibrant coloured bespoke marquee.

Simply Swing prides itself on being a wedding band specialist, but it’s the first time the band has played a wedding on New Year’s Eve.  Marc saw us at an event in London that his company was event managing back in October and decided we were the band for them.  The band played two live sets finishing at 9 pm (that’s the first time in the history of the band that we’ve not seen in the New Year!).  Marc and Nicola chose our 8-Piece show band comprising two vocalists, two horns and four rhythm to provide one laid back mellow set and one party set. The band was followed by a cabaret and the evening ended with a firework display. 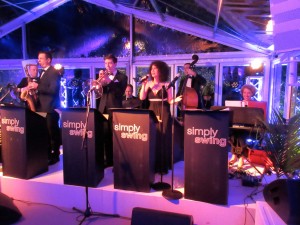 Marc and Nicola – what can we say?  Thank you so much for including Simply Swing in your fantastic New Year’s Eve wedding celebration!