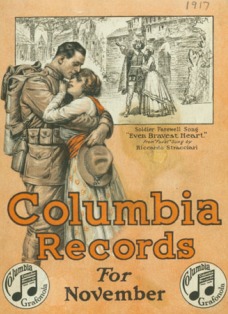 As we move into the New Year, 2014 brings with it the approach of the World War I Centenary. Whilst it will not be until July before the actual anniversary of the start of the Great War, World War Commemoration events are being organised all over the country to mark the occasion. The conflict’s Victoria Cross heroes will be honoured in the communities from where they set off to battle and no doubt many parties with live music will be organised in these communities too. Just what kind of live band entertainment will be suitable then?

Well, the music of the Great War was still mostly music hall entertainment which continued after the war, but gave way to Jazz, Swing, and Big Band dance music. Licensing restrictions had also changed, and in 1914 drinking was banned from auditoriums thus changing live entertainment forever.

Whilst this centenary occasion won’t be a celebration as such, we are likely to see many World War One themed parties and events. The Simply Swing band is available to hire and would be ideal for such events, being able to touch on the repertoire from the Great War but also take you into the Jazz Band and Swing Band era. Last year there were so many Great Gatsby parties and this year, we go further back in time and hope you will consider hiring our band for your Great War party entertainment or perhaps even a Downtown Abbey themed party!