Another fabulous afternoon yesterday at the Sheraton Park Lane Hotel where our Simply Swing Ballroom Band performed for the die-hard dancers who didn’t care that the weather outside was the most beautiful for over a year, they were happy to be inside and dancing to our band.  And rightly so as Simply Swing pulled out all the stops, playing ballroom and latin american dances with a few sequence dances thrown in for good measure. The event was such a success that we’ve been booked for two more at this wonderful hotel. We’ve been asked for a “Bus Stop” sequence dance next time so watch this space …

History of The Tea Dance

Traditionally a tea dance was a summer or autumn early-evening event from 4 pm – 7 pm, often preceded by a garden party and evolving from the classic afternoon tea.  It’s origins can be traced to the French colonisation of Morocco.  Also popular aboard ships, the usual refreshments in the 19th century were tea, coffee, ices, champagne, fruit, sandwiches, cake and biscuits.  The entertainment was mostly a small band playing light classic 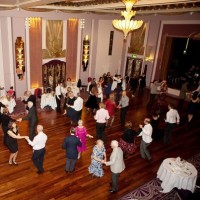 Dancing to Simply Swing at The Park Lane Hotel

al music – often referred to as a Palm Court orchestra – which performed dances such as the waltz, tango and, by the 1920’s, the Charlston.

The 1925 hit Broadway musical, No, No, Nanette, features a tea dance as the setting for the plot’s climax. It was this show from which the evergreen song “Tea For Two” came, still played at tea dances today usually as a cha cha.

If you’re thinking of hosting an afternoon party where your guests can chat, dance or listen then a tea dance is a great idea. Call us today on 0203 507 1988 for a tea dance quote.