The Art Deco vintage look is back. Fashion, flowers, music and decor are reminiscent of a time when brides wore lace which symbolised glamour and decadence.

We can’t recall a time ever before when vintage or retro weddings and events were so prolific. Inspired, of course, by Downton Abbey and The Great Gatsby the music from the Edwardian era through to the 1920’s and 30’s is now more popular than ever.  In the decade between The Great War and the Great Depression, the world was alive and vibrant.

Brides are likely to draw inspiration from old world Hollywood glamour and cinematic and literary influences like The Great Gatsby, Anna Karenina, Downton Abbey and A Royal Affair. 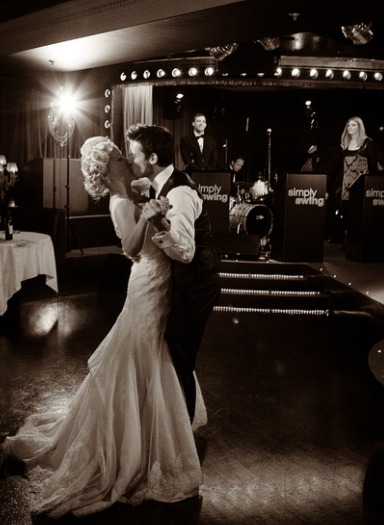 Swing bands are very much on trend. The musical swing style of the 1920’s and 30’s is now roaring back into popular culture and the repertoire couldn’t be more romantic: think Charleston, Jitterbug, Fred Astaire & Ginger Rogers.

We’ve noticed a change in the band’s attire too, with black tie and cocktail dresses being highly requested.

It follows then that for Art Deco or vintage weddings, first dance song trends will be selected from The Great American Songbook repertoire by composers such as George Gershwin, Cole Porter and Irving Berlin.

If You Were The Only Girl In The World

First published in 1916, this song has been recorded by so many artists from Doris Day to Barbra Streisand and was used in Episode 4 Downton Abbey – Series 2 [DVD]

Check out the beautiful lyrics:

A romantic love ballad and one of the most famous songs from World War I. British soldiers had sung it when they enlisted for the Front in France and Flanders and it remained popular for many years afterwards. Roses of Picardy is on the second series soundtrack album of Downton Abbey – The Essential Collection

What’ll I Do – Irving Berlin (Waltz)

A beautiful waltz by Irving Berlin from 1923. The song was used as a generalised theme in Nelson Riddle’s Academy award-winning period score for the 1974 film The Great Gatsby and features also in the current re-release with Leonardo di Caprio. In the lyrics, the singer questions how he or she will get by now that a recent romance has ended so this song would be best used as an instrumental first dance for a couple who want to show-case a waltz.

Made famous by Al Bowly and written by English bandleader Ray Noble, this song stayed at number one for 5 weeks in the US pop singles charts of 1933. The title says it all!

Composed for the 1927 Broadway Musical “Funny Face” this is great choice for a first dance as it can be performed in so many different musical styles from an upbeat 1920’s jitterbug through to a smoochy bossa nova (think Diana Krall).

Another Irving Berlin classic, written for the Fred Astaire and Ginger Rogers film “Top Hat” in 1935. This song has been featured in so many films throughout the decades including The Green Mile, Rain Man, A.I. Artificial Intelligence, The Purple Rose of Cairo, Wall Street: Money Never Sleeps. It exudes glamour at every level and is a fabulous wedding first dance song choice for both the vintage and modern couple and is featured in our top ten wedding first dance songs customer survey.

“You’re The Top” is a Cole Porter song from the 1934 musical “Anything Goes”. It’s about a man and a woman who wittily take turns complimenting each other. The lyrics are particularly significant because they offer a snapshot as to what was highly prized in the mid-1930s. The lyrics could easily be adapted for the modern day bride and groom who want to personalise the song and offer insights into their relationship!

The song was sung by Barbra Streisand in the 1972 film What’s Up, Doc? and it featured again in 1982 in Agatha Christie’s Poirot film “Evil Under the Sun”.

Simply Swing understands that for most vintage themed weddings and parties, a nod to the 21st century later on in the evening is welcomed.  That’s why our professional 5 piece classic swing band mixes up the old and the new, playing mostly vintage music for the first two sets and then moving to classic pop for the last party set, keeping that dance floor filled.

If you’re looking for modern vintage wedding music ideas or hosting a Downton Abbey themed party, do get in touch on 0203 507 1988 and see what we can do for you.